“The battle over documents and e-mails in the Michael Sussmann case just got hotter.

Back in August 2017, Fusion GPS co-founder Glenn Simpson testified to the Senate Judiciary Committee, explaining how his firm was retained to gather “lots of facts about Donald Trump.” He admitted that Fusion GPS met with reporters leading up to the 2016 election to spread opposition research against then-candidate Trump.

The context of Perkins Coie’s retention of Fusion GPS was further explained in a book co-authored by Simpson and Fusion GPS co-founder Peter Fritsch. They documented an April 20, 2016 meeting with Mark Elias (Perkins Coie partner and counsel for the DNC/Clinton Campaign), where Elias requested their services for opposition research:

Now the stories have changed.

Fusion GPS is no longer an opposition research firm, and they weren’t hired to dig-up dirt against Trump. Instead, they would have you believe, after the phony dossier and the Alfa Bank hoax, that Fusion GPS was retained to provide legal advice to the Hillary Clinton Campaign. Remarkable.

On April 6, Durham filed this motion to compel in the Michael Sussmann case, requesting the court require the production of “emails and attachments between and among” Perkins Coie, Rodney Joffe, and Fusion GPS. These emails and documents, according to Durham, “appear or involve or relate to” Fusion GPS’s provision of research and media services to Hillary for America, the DNC, and Perkins Coie. (Some documents had been produced pursuant to grand jury subpoenas dating back to the 2021.)

Hillary For America now intervenes in the Michael Sussmann case-

In support, Robby Mook swears under penalty of perjury that Fusion GPS was retained to provide “legal services and legal advice” 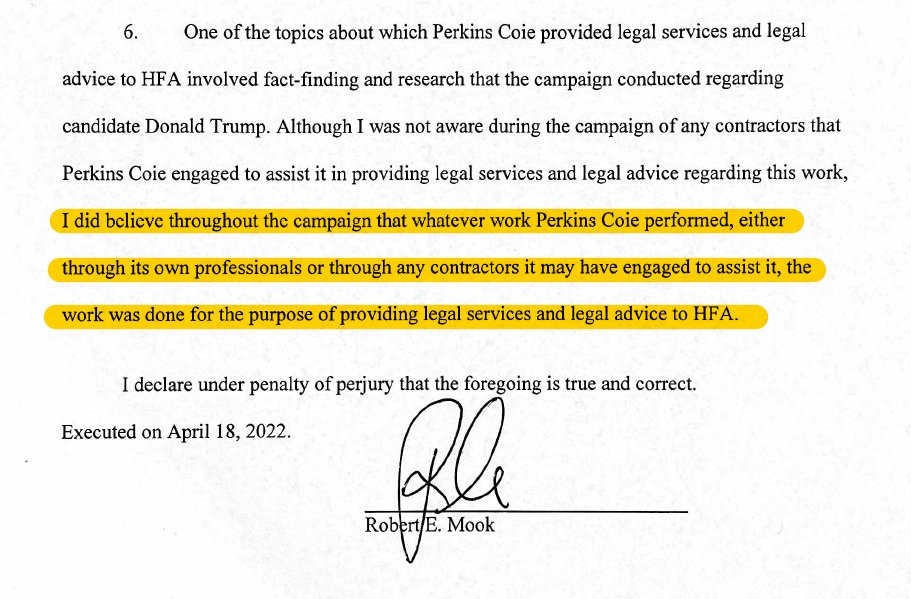